The Suffragettes in Kilburn


In January 1910 the Suffragettes opened a shop and office for the North West London branch of the Women’s Social and Political Union (WSPU) at 215 High Road Kilburn. The Hon. Secretary and treasurer was Mrs Eleanor Penn Gaskell. They were at this address until 1913, when they moved across the road to 310 High Road. Eleanor continued in post until 1915 and the WSPU had left Kilburn by 1917.

An amusing story appeared in the newspapers. Under the headline ‘She wanted to see the Show’, a little girl had gone into the Kilburn shop soon after it opened, placed a penny on the counter and said, ‘Please may I see the Suffragettes?’ At the time some people certainly regarded them as a side show.

The WSPU was an important element in the campaign for woman’s suffrage. Formed in 1903 by Emmeline Pankhurst and her daughter Christabel, the headquarters moved from Manchester to London in 1906. The organisation became skilled at arranging rallies and demonstrations, taking a militant stance in the fight to get votes for women; for example, their members opted to go to prison rather than pay fines or carried out acts of criminal damage that also resulted in being sent to gaol.

Mrs Gaskell
Scottish-born Eleanor Charlotte Lindsay had married George Edward Penn Gaskell, a barrister and secretary of the National Society for Epileptics, at All Souls Church, Harlesden on 14 July 1891.

By 1907, Eleanor was secretary of the Willesden branch of the London Society for Women’s Suffrage and she became an active speaker for the WSPU. Although she was willing to participate, George may have restrained her from taking part in militant activities. She was only arrested once, on the 19 October 1908, for causing an obstruction in Piccadilly Circus.  That afternoon, Eleanor and Annie Smith had been handing out leaflets for a meeting where Mrs Pankhurst and her daughter were guest speakers. The police claimed they were causing an obstruction as a crowd gathered and traffic slowed down to see what was going on. When asked to move on for a second time by a constable, Eleanor replied, ‘Why don’t you take us now?’ The two women were promptly arrested and appeared later that day at Marlborough Street Police Court. Eleanor told the magistrate that she’d been joking, ‘never dreaming that she would be arrested.’ They were released on bail and it seems likely Gaskell paid, as the money was put up by ‘a barrister.’

At their second court appearance, the two women again denied causing any obstruction, saying that they had been walking in the gutter and not on the pavement, and only one or two people stopped to watch. The magistrate disagreed and they were bound over, on their own recognizance of £10, to not repeat this sort of behaviour again during the next six months. Eleanor told the court, ‘I protest most bitterly against the injustice.’  Both women refused to pay but they were released.

George wrote many letters to the Home Office, complaining about the conditions under which his wife and Annie Smith were held before their first appearance at the Police Court. The matter was raised in Parliament a week later when it was argued that the matter could have been dealt with by a summons, rather than a court appearance. It was said that Eleanor and Annie had been ‘imprisoned in a small cell-like room, together with a woman charged with being a prostitute, for some two hours. The ladies complained of having been subjected to many other indignities while awaiting trial.’ The allegation was summarily dismissed: ‘these ladies were, in fact, treated with special consideration’ and held in an unlocked waiting room.

But symptomatic of the official attitude to such matters was the Prime Minister’s comment. When asked if he would, ‘afford facilities for discussing during the present session a motion relating to woman’s suffrage’ Mr Asquith replied, ‘No Sir; as I have already stated, time cannot be found for the discussion of contentious matters.’ His comment was greeted with ‘laughter and cheers.’

In the 1901 and 1911 census George and Eleanor were living at 12 Nicoll Road in Willesden. The only name on the 1911 form is George’s but his wife was probably at home. He wrote a long comment to the authorities.
A number of women suffragists spent the night of 2nd April (census night) in my house. As members of a disenfranchised sex they object to giving any particulars concerning themselves for the purpose of enumeration under a census act in the framing of which their sex has had no voice. They base their objection upon the principle that government should rest upon the consent of the governed, and as I myself uphold this democratic principle I do not feel justified in filling up any particulars concerning them against their will.

The enumerator who collected the form commented: ‘I interviewed Mr Penn-Gaskell in order to obtain the necessary information, but was politely, but firmly, refused.’

A large number of women boycotted the census, some refusing to fill in the form and registering a protest. Others spent the night away from home. Eleanor was a close friend of suffragette Emily Wilding Davison who hid in a cupboard in the House of Commons on the night of April 2, to avoid the census. (In all, she concealed herself three times in the House). Emily was immortalised on film when she famously stepped into the path of the King’s horse at the 1913 Derby:

The horse struck the woman with its chest, knocking her down among the flying hoofs . . . and she was desperately injured . . . Blood rushed from her mouth and nose. The horse turned a complete somersault and fell upon his jockey, who was seriously injured.

Queen Mary’s first thought was for ‘poor Jones’, the jockey and she referred to Davison as ‘the horrid woman.’ Sadly, Emily died from a fractured skull four days after the race. The previous year she had been nursed back to health at Eleanor’s home, after being on hunger strike and forcibly fed in Holloway prison. 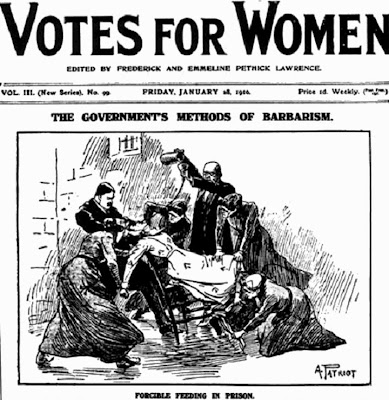 The Kilburn WSPU campaigned locally against the Liberals during the General Election of 1910.
The woman suffragists have been taking a more active part than in most of the London contests. Their committee-room in the Kilburn High-road with its gruesome representation of a suffragist being force fed in prison, has attracted a great deal of attention, and on Sunday their speakers were to be found arguing with not particularly responsive crowds at every street corner.

The Messina Avenue meeting
But on occasion the WSPU speakers met with a far more robust reception. On 17 June 1911, the Times reported a typical case which again illustrated how much resistance there was to the issue of votes for women. On the evening of May 13, Miss Marie Naylor, a well-known WSPU activist, had been talking to an attentive crowd of about 40 people in Messina Avenue, opposite their office on the High Road. Suddenly a first floor window was thrown open. This was above a sporting goods shop, 232 Kilburn High Road on the corner with Messina Avenue. Richard Annenberg who worked in the family business with his elder brother, along with two or three other men, lent out of the window and started making a ‘hideous noise with horns, whistles, bells, tin plates, and yells’ to disrupt the meeting. A large crowd of about 500 people gathered, blocking the pavement and street, holding up the traffic. In this instance it wasn’t the WSPU who were summonsed, but the shop assistant, for causing an obstruction to the highway. When he appeared in court, the police said the noise from the window had continued for half an hour, with Annenberg shouting,
We are doing this as a protest. These people come here and spoil our business. Why don’t they go away? This is not done as a joke; we don’t want suffragettes here spoiling our trade. Do we want the suffragettes?
He and his companions chanted, No! No! No!

This was obviously not the first meeting the WSPU had held on the corner of Messina Avenue, one of the closest convenient pitches to their office. Annenberg said he had a petition signed by the majority of residents and shopkeepers of the neighbourhood complaining of the annoyance caused by the meetings that drove customers away. He denied objecting to the suffragettes because they ceased to patronise him, saying they had never bought anything from him, apart from a croquet ball. Why a single croquet ball? Perhaps it might be explained in the context of one of the WSPU’s most common protests, that of breaking windows! Richard was fined 20s with 2s costs.

The Annenbergs, with a main shop in King Street Hammersmith, ran the sporting outfitters shop in Kilburn from 1910 until 1934. Today, showing how the High Road has changed, number 232 is a Speedy Cash Loans.

George and Eleanor Penn Gaskell lived at 14 Mapesbury Road, Brondesbury from 1929 to 1937, where she died on 8 May 1937 at the age of 76. George resigned from his post as secretary to the National Society for Epileptics, and moved to Chalfont St Peter where he died on 12 June 1946. His Times’ obituary notes his pioneering work in helping epileptics lead a normal life but makes no mention of his wife or his support for the suffrage cause.

Miss Marie Naylor
Marie Naylor, the WSPU speaker in the Messina Avenue incident, was born about 1866, the daughter of a wealthy clothier who lived in Barnes. An artist, she studied and exhibited at the Royal Academy and had a one-woman show in Paris in 1898. She joined the WSPU in 1907 and became a regular and eloquent speaker at their meetings. One of 58 women arrested during a demonstration that year outside Parliament, she was released without charge. But her commitment to the cause was unwavering and she wrote an article published in the WSPU’s paper, ‘Votes for Women’, where she vowed to ‘follow these women to prison or to death’.

In February 1908 she was arrested again and this time sentenced to six weeks in Holloway Prison. In November 1911 she broke a window in the Home Office and spent five days in prison. Marie lived at 1 Stamford Bridge Studios off Fulham Road, from 1899 until her death in 1940 during a bombing raid while visiting friends in Petersfield, Hampshire.

The Right to Vote
The long battle of the suffragettes finally brought about change. In 1918 the Representation of the People Act allowed women over the age of 30 who met a property qualification to vote. Although 8.5 million women met these criteria, it only represented 40 per cent of the total population of women in the UK.

The same act abolished property and other restrictions for men, and extended the vote to all men over the age of 21. Additionally, men in the armed forces could vote from the age of 19. The electorate increased from eight to 21 million, but there was still huge inequality between women and men.

It was not until the Equal Franchise Act of 1928 that women over 21 were able to vote and women finally achieved the same voting rights as men. This Act increased the number of women eligible to vote to 15 million.