Where was Kilburn Wells?

Today, No.42 Kilburn High Road at the corner of Belsize Road is a branch of the Franco Manca pizza chain. The London and South Western Bank opened here on 31 December 1874, and next door were two small shops, numbered 44 and 46, now reunited as a single premise, No.44, Rush Hair Salon. When the bank was expanded and rebuilt in 1898 to form the present building, a stone plaque was placed at first floor level saying this was the site of Kilburn Wells.


The exact location of the Kilburn Wells has long been disputed, but after considerable research we now believe it was situated behind today’s pizza restaurant and Rush hair salon. The best evidence we have is that when local builder Henry Oldrey was demolishing some old houses to build a new photographic studio for George Nesbitt in April 1891, he found the remains of a brick arch and a tiled passage way behind what was then No.46 Kilburn High Road.
In the 18th century, Kilburn gained a reputation among Londoners as a pleasure resort, known as Kilburn Wells. It grew up around a medicinal spring of fresh water in Abbey Fields, near the site of the old Kilburn Priory and in the grounds of The Bell, or Kilburn Wells public house as it was called at the time.


On a 1762 map drawn by James Ellis, The Bell and the Wells are owned by Holton Vere. Successive generations of the Vere family held the land and rented out the pub. Soon after he became landlord, Joseph Errington, placed an advert in The Public Advertiser in July 1773 which lists its many attractions:

‘Kilburn Wells, near Paddington. The waters now are in the utmost perfection: the gardens enlarged and greatly improved; the house and offices re-painted and beautiful in the most elegant manner. The whole is now open for the reception of the public, the great room being particularly adapted to the use and amusement of the politest companies.

Fit either for music, dancing or entertainments. This happy spot is equally celebrated for its rural situation, extensive prospects, and the acknowledged efficacy of its waters; it is most delightfully situated near the site of the once famous Abbey of Kilburn, on the Edgware Road, at an easy distance, being but a morning’s walk, from the metropolis, two miles from Oxford Street; the foot-way from the Mary-bone across the fields is still nearer. A plentiful larder is always provided, together with the best of wines and other liquors. Breakfasting and hot loaves.’

He commissioned the French artist François Vivares (1709 to 1780), to draw the Long Room (the great room mentioned above), and Errington produced a handbill to promote the sale of the Waters which cost 3d a glass.

But despite his efforts to publicise the Wells, Errington went bankrupt in May 1795 and the Kilburn Wells with its tea gardens and medicinal springs was put up for sale. After further renovations, the Bell Tavern -‘usually known as Kilburn Wells’, was put up for sale again in 1807 and had a succession of landlords over the years.

‘The spring rises about twelve feet below the surface and is enclosed in a large brick reservoir, which bears the date of 1714 on the key stone of the arch over the door. The water collected in the well, is usually of the depth of five or six feet, but in a dry Summer it is from three to four, at which time its effect as a purgative is increased. When taken fresh from the well a few inches under the surface it is tolerably clear, but not of a crystal transparency: at first it is insipid but leaves an evident saline taste on the tongue. At rest, and even on slight agitation, no smell is produced but on stirring the water forcibly from the bottom of the reservoir, it becomes turbid from impurities which have been collected in it, and a considerable odour is emitted like that from the scouring of a foul gun barrel.’

The description of the well given by Dr Bliss matches the remains which Oldrey found in 1891. The use of the water for curative purposes appears to have generally ceased in the early part of the 19th century.

The popularity of the Wells suffered a further blow after the London and North Western Railway from Birmingham to Euston cut through the pleasure gardens in 1838. The area where the well existed, across the rail tracks and only accessible from the High Road, was made into a kitchen garden.


Although the tea gardens were now confined to the grounds behind the public house, it continued to attract visitors. There were several tea gardens on the fringes of the London, offering a day’s outing and entertainment in the country just a short walk from its congested city streets. Dickens in his ‘Sketches By Boz’ includes an essay called ‘London Recreations’, first published in the Morning Chronicle 15 April 1835, which describes a visit to a tea garden. He mentions Kilburn, but the essay is probably an amalgam of various gardens.

There was a shooting butt in the grounds of the Kilburn Wells pub, hired to volunteer corps who would spend a day there, to practice or shoot for a prize, before dining and then marching back to town.

The Wells attracted other visitors, seeking a secluded location. Although frowned upon by the authorities, numerous duels of honour took place in the 18th century and were well publicised; (duelling was only made illegal in 1819). Duels were particularly prevalent among young military men who often selected isolated neighbourhoods just outside Town, and Kilburn Wells was a favourite venue.

At 7am on 2 July 1792, James Maitland the 8th Earl of Lauderdale and General Benedict Arnold met here after Lauderdale made an insulting remark about Arnold in the House of Lords and had been challenged to a duel. It was agreed they would both fire their pistols together. Arnold fired and missed, but Lauderdale declined to return Arnold’s shot saying he had no desire to kill Arnold. After consulting their seconds, the duel was considered over. 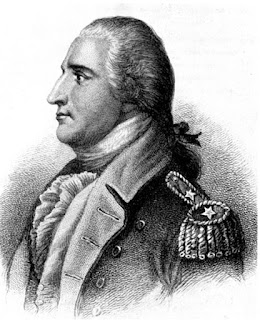 Benedict Arnold has been called, ‘America’s first traitor.’ He was an officer in the American Army in the war against the British, and George Washington promoted him to Colonel in 1775. Arnold achieved some military success but made enemies in Congress. He and his wife lived well beyond their means and Arnold entered into some shady deals that included the use of government supplies for his own personal needs, for which he was court martialled. Arnold had fought gallantly for his country and felt hurt by the way he had been treated.

In retaliation, he secretly approached Sir Henry Clinton, the British commander-in-chief in America and asked for £20,000 if he was successful in surrendering West Point and its garrison (where Arnold was now in command), to the British, and £10,000 if he failed. Clinton agreed to pay £20,000 but only £6,000 if Arnold was unsuccessful. The plan went wrong and Arnold defected to the British in New York, where he received the promised £6,000 (today worth about £750K), followed by later payments from King George. In December 1791 the Arnold family sailed for England and lived comfortably in London.

Arnold received good publicity after the duel with Lauderdale at Kilburn Wells. He tried but failed to get a government post, so in 1794 he returned to his maritime trade, working for the British in the West Indies against the French. But in 1801 he became ill and died in London on 14 June while living at 62 Gloucester Place, where a plaque to his memory describes him as an ‘American Patriot.’

Pugilism, sometimes called ‘the science of boxing’, was also very popular and ‘mills’ or fights were frequently held at Kilburn Wells. At this time there were no timed rounds, the men fought until they were knocked down and the fights lasted for hours. In August 1781 George Ring ‘a battling baker from Bath’, beat a butcher called Edwards in a fight where ‘no bottom was wanting on either side, and a great number of knock down blows were given’. In 1783 Daniel Mendoza beat John Matthews at Kilburn Wells after fighting for two hours. Mendoza was the first Jewish prize-fighter to become a champion and he was England’s Heavyweight Champion from 1792 to 1795.

In 1863 the Old Bell was pulled down and the present public house was erected on the site. The Ordnance Survey map published a few years later shows the development of the area, and it is now impossible to find any remains of the once famous Kilburn Wells, which disappeared in the Victorian building boom, giving us today’s Kilburn streets. However, 1a West End Lane is called Wells Spa House.